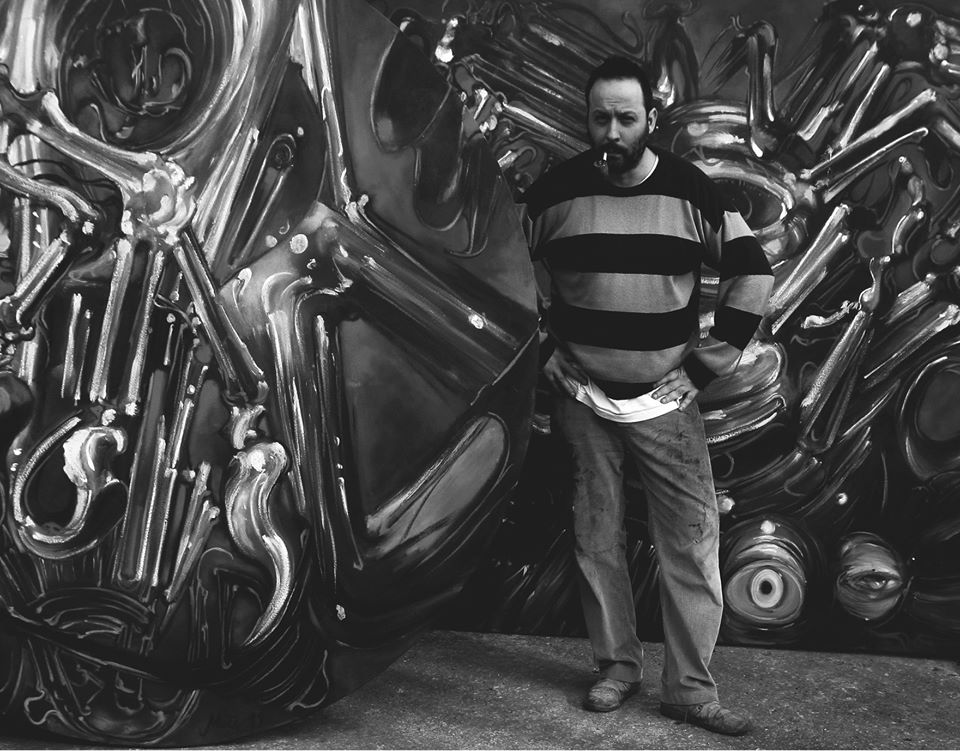 MATE AND I MET IN PARIS SOME YEARS AGO. HIS WORK I GOT TO KNOW LATER, FIRST WE TALKED, ABOUT ANYTHING UNDER THE SUN, LANDING USUALLY SOMEWHERE AROUND PAINTING.

The hectic nature of his conversation, the unexpected turns, violent enthusiasm and brilliant insights are all to be found in his paintings too.

They manifest a curious mixture of life and death. Like in outer space it’s all floating-in from great obscurity, light only flashes when bouncing on an object.

These objects are creatures of horror and beauty; skulls and machine skeletons, hybrids of insects and robots.

Morbid as they are they pump with high-power electricity, all squeaking urgency, movement, Life!

Ofir Dor: Could you draw a general line telling your story? How did you get into painting? How you built your life around it? Where are you coming from? Where did it take you?

Mate Djordjevic: I don’t think I found painting, but according to a higher pattern of logic, it chose me. It is true that the question was of a talent expressed in the earliest years but without work-recognition-organization I don’t see any possibility of survival in any profession for a long time.

Painting is like a craft – only an initial capsule; and you – and I – we know very well that there are a thousand colossal ways that are important for bringing fullness into the painting. These are all practical things (literature, film, travel, education, languages, people, environment, museums, daily work routine, fascinations, family etc…).

In one of our conversations you said you’re glad to talk to me; because of certain qualities: dedication, ingenuity, loyalty etc. You see, I think that everything you mentioned is not me personally, but by some sick process of deconstruction: my craft.  Precisely for these reasons, life built on such and such foundations, from time to time, offered certain solutions: formal or informal.

My birth is related to a country called Yugoslavia, today, after the “civil war”, it is Serbia – I am from Serbia. Although, honestly, for me personally, it could be: Nationality – Vampire from the Carpathian valley. What I am trying to say is that territory, the place and I – are – first of all: Painter!

So I’m somebody, anybody, nobody.

Asking myself, on a more logical level, “where did painting really take me”, the questions arise are rather: why and how?

Ofir: You said “There’s a continuation from Giotto to Picasso”, that’s an inspiring thought. 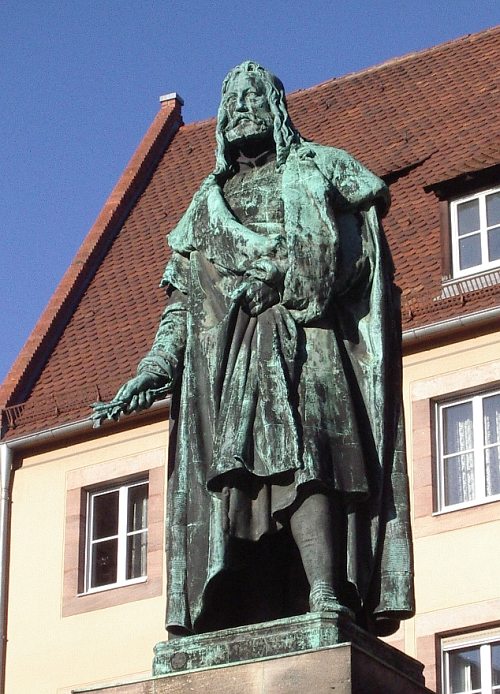 Mate: Of course we all bath mercilessly in the history of painting. When you mention craftsmanship and history, the Dürer monument in Nuremberg comes to my mind.
“La Pere“ (The Father) Dürer is standing in the uniform of a “ravaged nobleman” and holding a flower.

I look at him and think how man is a prisoner of his own projections from early childhood, and I look at this masterpiece of a monument and think of this genius for whom there are no years but immortality.

So I say to myself (beyond my individual affinities), that Dürer is maturing in me and seems, with metromaniac accuracy, to be more beautiful than ever.
I have the same opinion about Hans Memling, no less modestly!

Today, when we look at paintings, there is space behind the spaces where they are created or exhibited, space where thinking-consideration reigns:
Is it rather intellectual, serious, status quo, peaceful? Even more than we would like to think? – I really don’t know.

What I do know is that in the past, artists were really careful about their paintings not to show which artists they liked. Today, when you notice Fra Angelico, Lucas Cranach or Dubuffet in a painting, it seems like a good discussion or dialogue.

Throughout history, painting, like the strings of a marionette, is wound around a professional thread; we all know this as an open secret. There has never been a “crisis” in painting itself, these are stories for fools… man himself produces these personal crises, radio transmitted to others. For example: Insects, they don’t spend much time in the presence of humans, probably out of mutual fear… but they are the oldest creatures in the world! It’s people’s imaginations claiming bugs are ‘ugly’, it’s simply not true!

It’s just that they are so different from the expected, and the unexpected scares a person.

Ofir: How do you approach a new piece? Do you have an image to start with?

Mate: From time to time… I don’t have a fixed dynamic… sometimes I draw; I have a large number of notebooks that I keep as diaries. After a certain number of drawing sessions, what was developed on paper simply enters my hand; that’s when I’m in the mood for a closer structural approach. 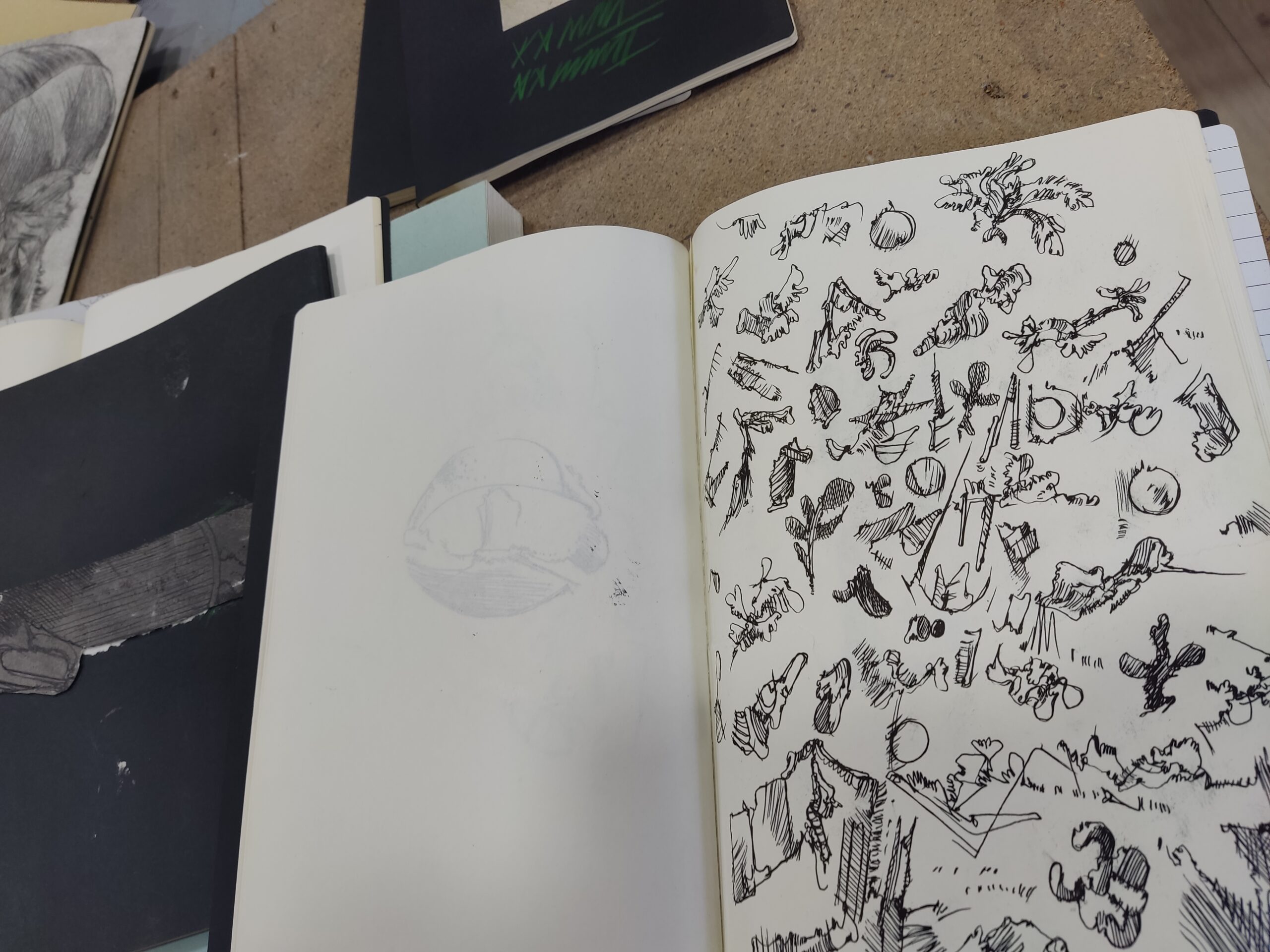 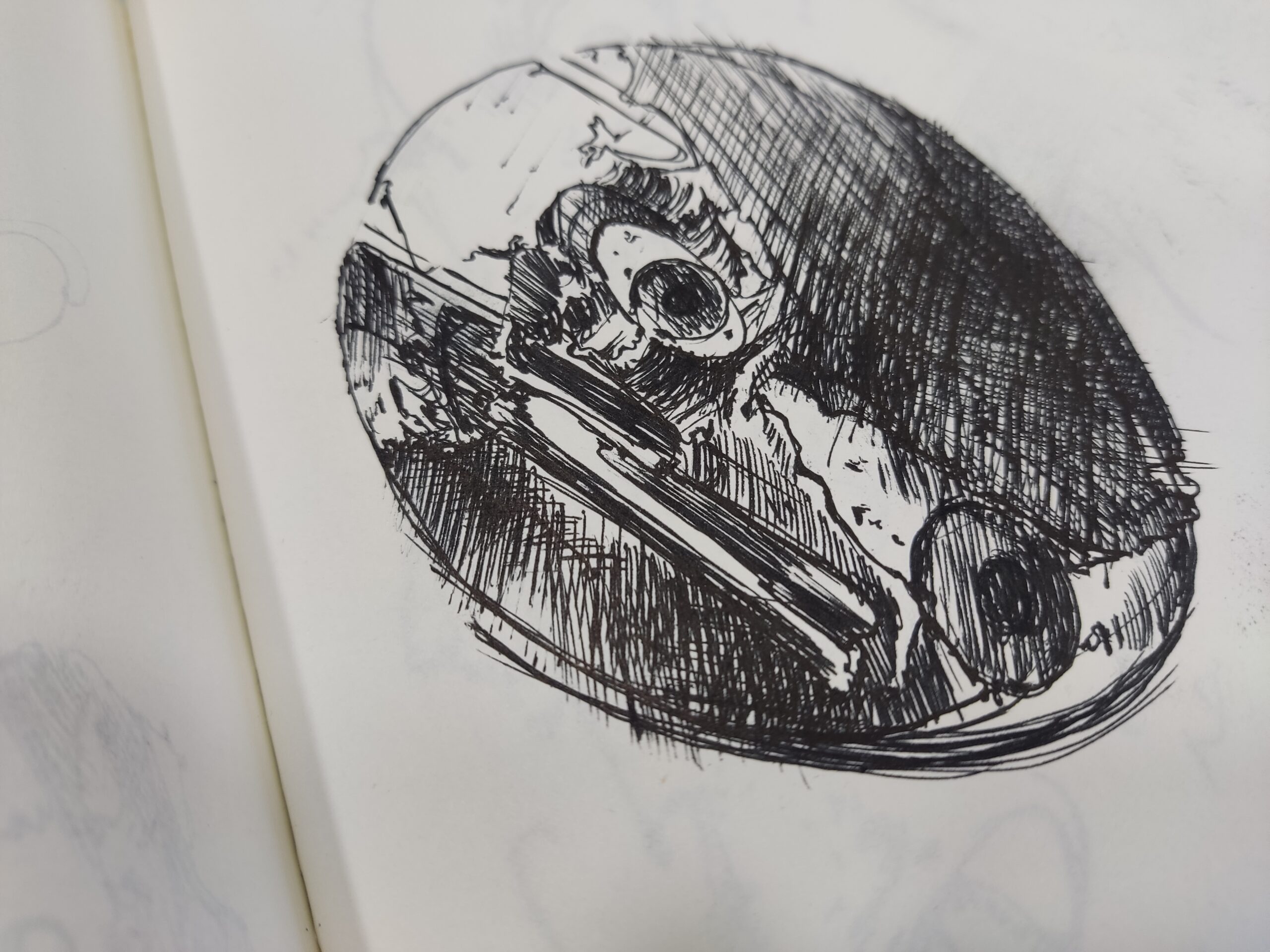 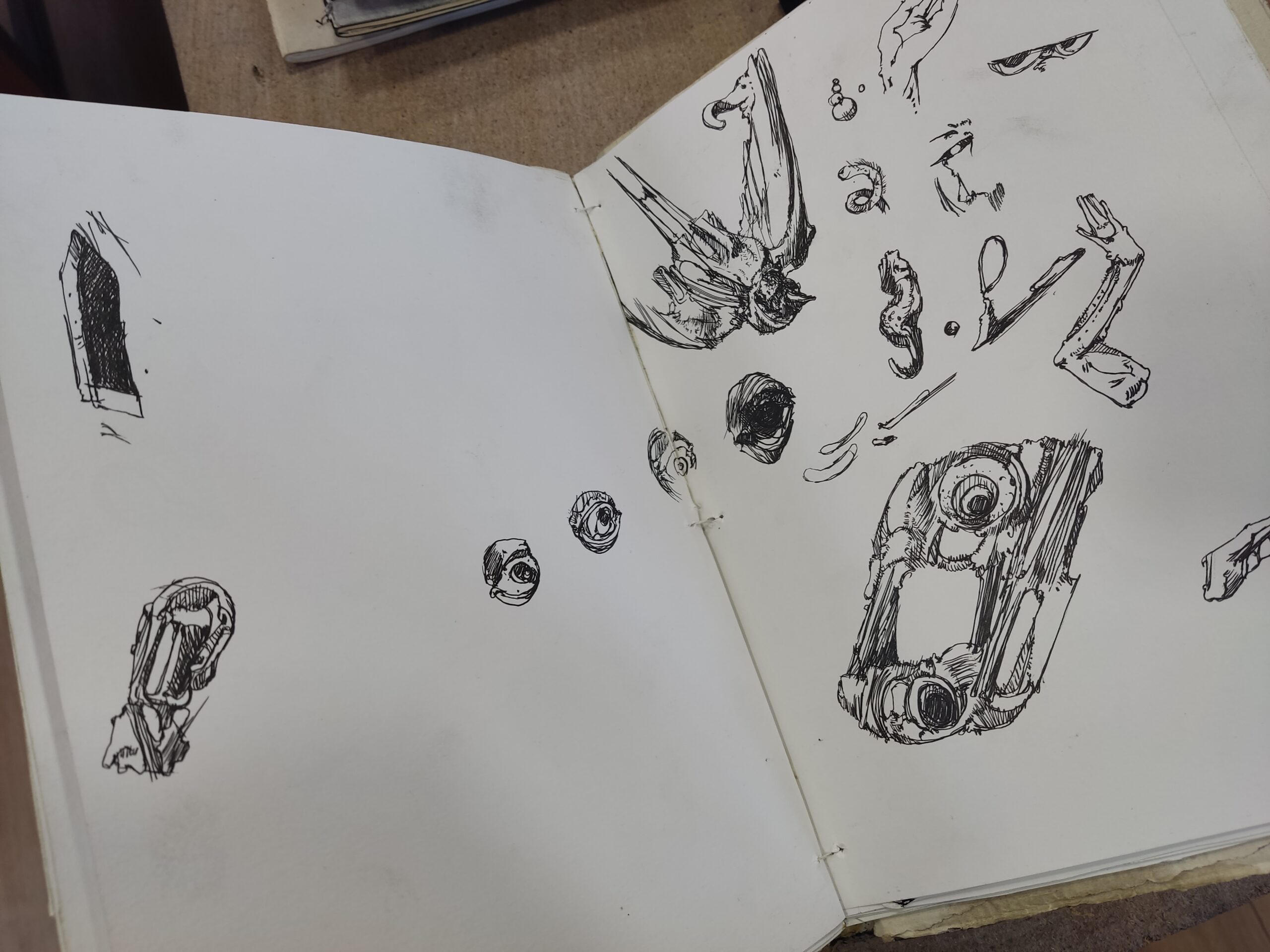 Sometimes I just sit – with a cigarette – and the painting flows out of the brush.  But the common point for all these possible approaches is daily work routines!  There’s no Fame in the beginning itself…

I could tell you some personal monomania stories… but the truth is that inquiry is a process and that process takes time.

The canvas might be unorganized or unconsidered, and other times it’s richer when calculated! There’s the process and the rules imposed by the image itself – sometimes when there is no hope, something rumbles and the thing is done, and sometimes it’s a pain… If the picture itself demands that you divide it properly, and you did not, that’s where the threads imposing the rules will tangle.

That’s why a handicap in creation might help – we are at least two rows away from the image produced by the peaceful life of a man from the year 1500. Back then the passage of time has helped men to feel things, from the metaphysical side, more clearly!  I don’t have a clear concept apart from painting fiction, I feed on literature-I read.  For me it is a sufficient bastion for things to gain fullness.

Ofir: What about the images? At one time morbid, apocalyptic yet full of energy, movement and lust… could you say something about this dialectic?

Mate: I agree! These figures have an imagined duty “To Be  – To Have”, satisfied or dissatisfied.  Once upon a time I said (and it seems to me to be completely true), that there is some innate fear in me, that I won’t be able to express myself to the end – and that the images act like a lover in the absence of the other; wild, flourishing, growing to break away from solitude!  It’s a matter of defending or attacking, not my paintings, but Greek drama.

Morbidity-Apocalypse-Energy-Movement-Loss, it can be: Aeschylus, Euripides, Sophocles or Shakespeare.  And since I’m a bastard of literature, it’s a clear thing!

Ofir: How about the relationship between space and form, between color, space and figure?

Mate: It’s like a clear amalgam. Space in paintings is what we could attribute to “metaphysics”.  Without such and such a space, the picture has no direction and movement has no form.  In a general sense the picture needs to be inhibited by something and at the same time allow it to move.  To be ugly and beautiful.

Made through a craft that requires knowledge and dislocated from the inside like a perfectly broken being. We are talking about a form of space that is occupied by “time”. Only painting is in the middle. For these and such reasons, painting has – to this day – an enormous power.  It is like the Seraphs of the ancient; they look at space as a straight line in which past, present and future meet, on one line.

This space we are talking about is a possibility in itself! 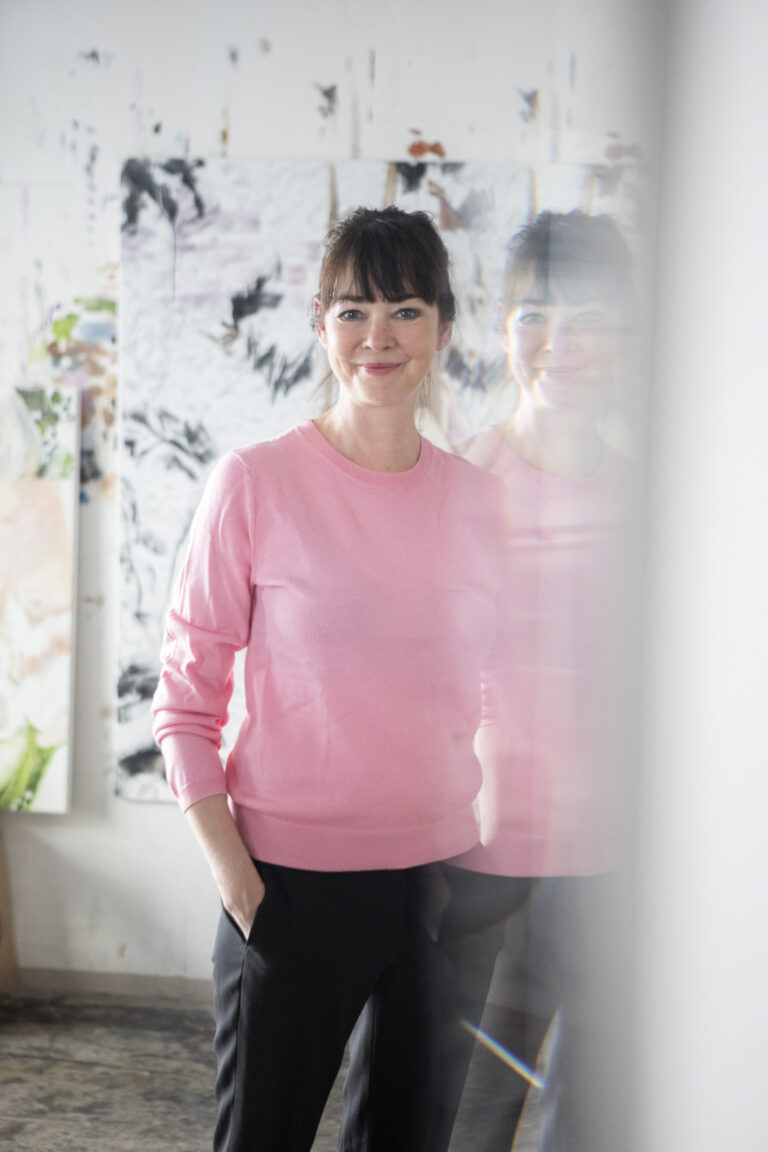 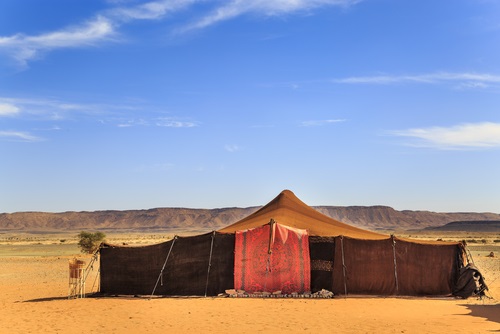 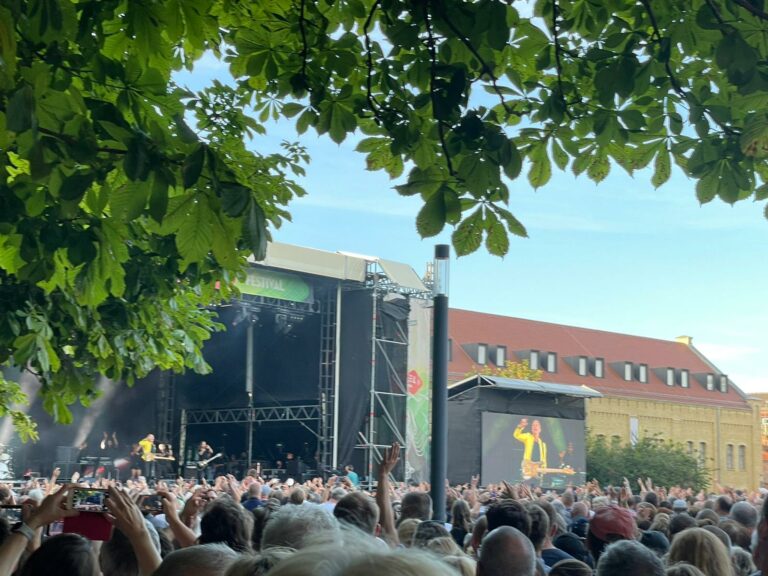