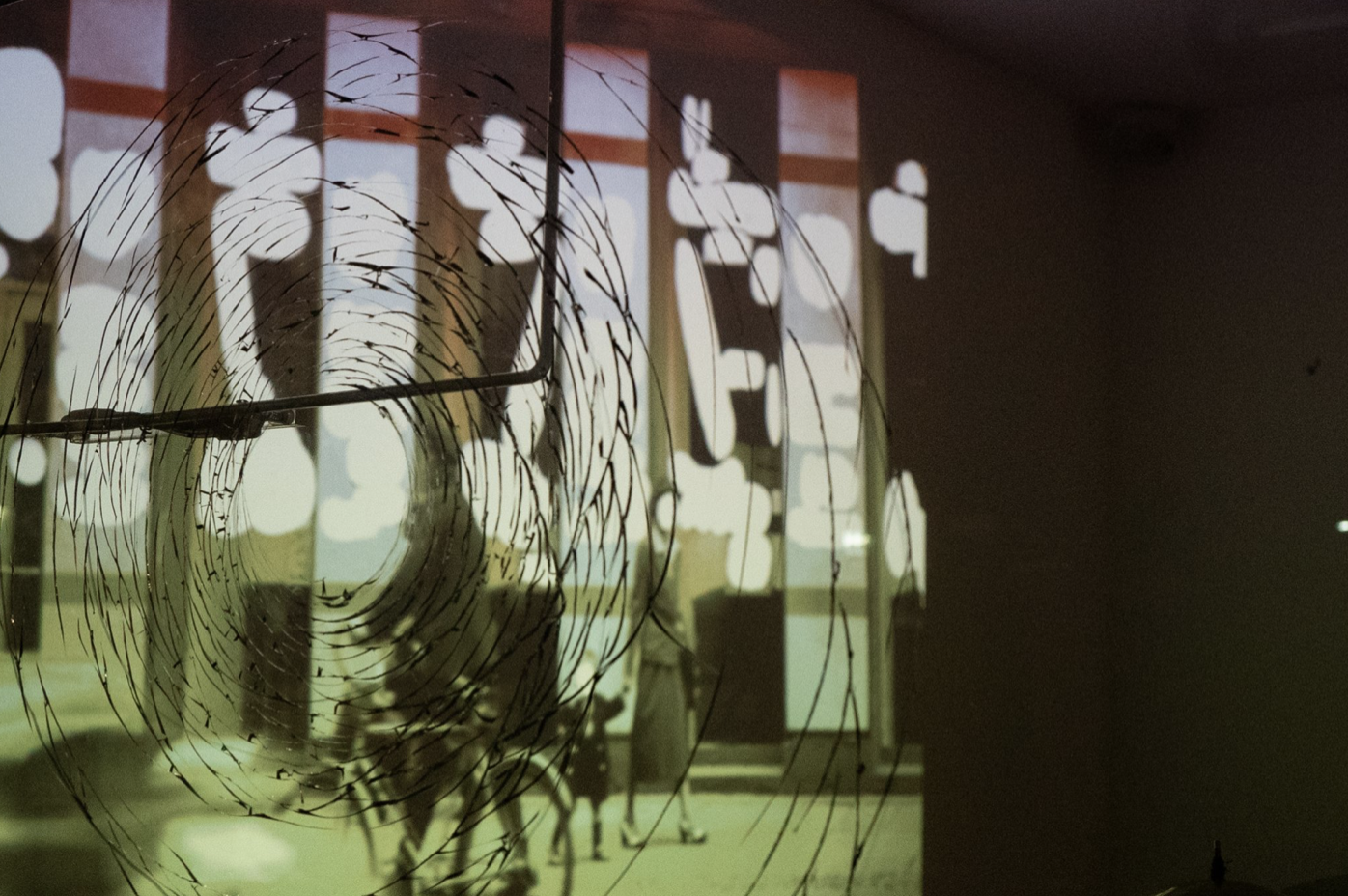 Kang Sunkoo works in the field of art and architecture. He is currently realising Statue of Limitations, a sculptural installation which was selected in a competition for the Humboldt Forum in the Berlin Palace. His proposal Heimat Heimat was recently awarded the 1st prize in the competition for a permanent art installation inside the Federal Ministry of the Interior, Building and Community in Berlin.

In the wake of the EU parliamentary elections in May 2019, anti-gentrification messages had been prominently present in Berlin’s public space. During this time, Framed moved from director Yael Nachshon’s private apartment in Berlin-Prenzlauer Berg into its newly leased space in Berlin-Friedrichshain. After the renovation and shortly before the opening event, all storefront windows of the building were destroyed. The marks of the destruction remained visible in the glass panes. Graffiti and stickers gave the appearance of an action motivated by an anti-gentrification agenda.

Framed’s current address appears on a list of properties compiled, mapped and published by an activist group which accuses the owner of ruthless tactics and destruction of sociocultural urban environments. The group organises events and publishes an internet blog to publicly shame the property owner, his family as well as related businesses and to mobilise resistance by the tenants.

Until now (September 2019), the owner of the building has refused to specify when the windows will be repaired. No concessions have been made to Framed to reduce the rent due to the broken glass panes, additional to other exploitative conditions. These difficulties as well as the stigmatisation by the local community are part of Framed’s struggle to remain economically sustainable as a non-profit cultural organisation.

Both, owner and tenant, left Tel Aviv for Berlin at different periods of time without any previous relation to each other. Two unlike Jewish biographies are now linked in a conflictual lease agreement for a property in Berlin-Friedrichshain and by being recipients of acts of aggression and destruction. The missing evidence if the attackers were aware of the cultural identity of their target adds to the ambivalence of the situation.

The exhibition begins on November 9, 2019, 81 years after the night of the November Pogroms in 1938. It studies the relation between notions of territory, property, identity and social behaviour. Windows frames a moment in the developing history of Framed, the city of Berlin and its people.

Music: HAGGAI COHEN MILO & YONATHAN AVISHAI
A one of a kind encounter of two of the most unique voices of their generation. An intimate duet featuring their original compositions as well as songs from the American jazz book.

Haggai Cohen-Milo is a virtuoso of the bass and a pioneer of interdisciplinary improvisation and performance. Undercurrents of folkloric traditions, pervasive and poignant melodies and eclectic rhythms are characteristic to his distinctive style both in his playing and in his compositions.

Haggai draws inspiration from everywhere. His contemporaries within the music world, as well as other art genres, are his greatest source of influence alongside the natural world and the animal kingdom. There is beauty in other artistic disciplines that inform and inspire his own work.

He advocates collaboration to amplify the best in individuals, especially interdisciplinary partnerships. The right collaborative relationship serves to bring out one’s best work and elevates the final piece or project to a level that wouldn’t be attainable for a single individual.

His MakeSpeak method, a structured approach to interdisciplinary improvisation, aims to make interdisciplinary collaborations more deliberate and aware. As Musical Director and Composer on the piece “Jephta’s Daughter”, produced by The State Opera House of Munich premiering July 2015, Haggai is applying the MakeSpeak method as a foundational skill-base for the performances.

Haggai’s compositional work beyond the jazz/world music genres include orchestral scores for two feature films and scores for a variety of ensembles for new dance works, commissions include the Munich Opera (Saar Magal), San Jose Dance Co. (Kara Davis) and more. In his music you can hear his Middle-Eastern roots and attraction to traditional folkloric genres.

Based in France, pianist Yonathan Avishai is undoubtedly one of the most singular voices of his generation. Whether through a concert, in the theatre or in a workshop, this unique musician, shares his passion for sound, music and its history.

Yonathan, was born and grew up in Israel. He began studying the piano at a young age and discovered in his early teens jazz. Already at the age of 14 he formed his own groups and performed at clubs and festivals in his country. He often accompanied touring American musicians in Israel (Walter Blanding Jr., Marcus Printup, Allan Harris) and was part of Arnie Lawrence’s Ensemble.

He was a member of The Left Bank, a cooperative association of musicians formed to promote original music in Tel Aviv. This experience led to an involvement with the social and local aspects of cultural development. Yonathan took part in organizing musical events in various facilities in the city. As a result of these activities, in 2001, he arrived at a socio-cultural center in Alsace (France) as a part of an European exchange program.

In 2002 he moved to Dordogne (France) and got involved in the local cultural scene. He studied musicotherapy in Bordeaux (Atelier de Musicotherapy de Bordeaux) and developed a true passion for teaching and pedagogy. Yonathan signed recently with label ECM as well and his next trio album will be released in the beginning 2019.

Inspired by artists such as John Lewis, Art ensemble of Chicago and Mark Rothko, between tradition and modernity, Yonathan strives to deepen the dimensions of his music. Packing each note with a dramatic charge. He creates a poetic world rich in emotion and colour. His compositions are restrained, subtle and feature great refinement.